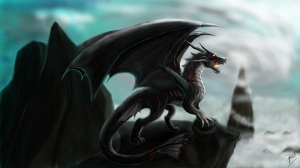 And from the dark he rises

The Room is dark, The smell of wheat, stale alcohol vomit fill the room.  A knock at the door…” think he is alive” A unseen voice says a female answers ” the bar girl says he was when he paid her” ” knock again…….
the knock is repeated a mug is thrown at the door and shatters. “yep he’s alive”.  Mumbles and more crashing bottles fall and swearing can be heard. The female asks ” should we go in?”  the male voice replies ” ya its almost sunup we should be off.  The Female replies ” like he will be able to ride in this condition”. The male answers “He lives he can ride”
Hearing the knock at the door and the Words he grabs a mug and throws it. The smash ringing in his head He thinks

The door opens the Light washes over him. SHUT THE DAMN DOOR he grows  as the two enter the room. . .
The door closes the male speaks ” we ride in a short order, throw up and be done with it or drink more your choice”. The female replies” More drink he drank enough to kill 12 men and you want him to drink more?”
I raise up “I did not drink enough to kill 12 men for I’m still alive. . . why I have no idea”  Issues is he knows why he is alive. . . I look over and to the night table and grab a bottle of tablets.  Pours out a few and toss them in my mouth and swallows them down with stale mead. The male voice answers yes that’s the answer more pills that will do it.  Look Ranger you and the Elf know this is me and you still ride with me…  The Ranger about as tall as a strong horse and keen of eye, beard and speaks little  a light chain shirt and a thin jerkin coves him all in a forest brown.  She is of Elvin decent skilled in many thing prayers, daggers and the bow. A fine chain shines a fine bow and short swords hang at her hip. .
The Ranger draws the drapes.  I role over to avoid the light. The Ranger speaks still amazes me how you vanish is shadows. . . Its a gift Gray can I ask WHY the hell we are riding at this hour. . . The Gray replays well your little brawl last night will not go over to well and we have a job. .  “Joy” I reply “what is it this time” I mumble.    Will talk on the way.  “Fine go get the food and I will armor up”. .  The two leave the room. . . From my saddle bag I pull out an Image stone and set it upon the table.  The stone comes to life and there is a tall woman Long dark hair pale skin and fangs can be seen.  The curves of a stunning woman can be observed.  It speaks ” I love you ” is all it says.
I rise from the bed bones crack and snap in to place. .  scares from many battles can be seen.  The scars in my  mind are worse. .  The woman Vampire really my.. It does not matter . . . In the silver glass I see a heave man of many seasons long flowing hair.  Closing the shades  it becomes clear why I disappear in the shadows.   I grab my  Armor leather chain and leather pants riding boots I sling my twin short swords over my shoulder.  my Ear ring where the hell is it . .  tossing the table to the side there it is and adds it back to my ear. I have few items left. My armor, my two mystical swords, a ring of protection the ear ring and a chains of charms around my neck.  That’s all I have left after the . . . Again it does not matter…  Placing the Image stone back in the saddle bag along with the tablets, pouch of gold.  Tossing 3 gold coins on the table  “I pity the chamber wench that has to clean this place”.
Enter the main room of the tavern blood can be seen on the floor.  Leers form the staff and owner as I descend the stairs. The Ranger speaks “and you say I have a bad way with taverns”. I reply “do you ever not have to point out the obvious”. Its “My gift” is his retort. The owner rambles over. . “you your a menace, beating them half to death and all the mead the broken chairs and tables….”.  Oh do shut up Rastan just give me the damn bill and shut your hole… Is my only reply.”   Rastan looks me over and says “50 gold” “Rastan I could as easily kill you as pay”.  Yes Airister but when you and the riders need a place to stay where would you stay then?”.  “He has a point” Pipes in the Ranger… “He is always good for a bed and a Pint”.  “Who’s side are you On Ranger mine or Rastan’s ?” ” Well that’s Obvious his now pay the man and lets be off”…”Fine Ranger.”  “Airister You know You caused the fight now pay up and shut up..  I toss Rastan the 50 gold “that is also to cover when the constable come asking questions” “Fine, fine. Airister I would have taken 30 for it all but 50 works”. . . I mumble “I would have paid 100 and wonder off…”
The light hurts my eyes. 4 mounted riders await.  A Paladin in bright shining armor, a thief in stolen garb,  the Elf and The Gray Ranger. . . with distain the Paladin looks over.  I see it was another drunk’n night for you.  “Look metal man not all of us live by a honor code” is my only reply.  the Thief laughs and the elf shakes her head and the Ranger just tosses his head to my horse.  My horse a mount as black as night eyes coal and ill tempered much like its rider…..   As they ride out of town. A woman looks out the tavern doors a large gem in her hand a queens ransom in value.  Her pay for one night with Airister. She wont speak of the words he screams in the night the changes he goes through in the dark or of the verbal abuse she takes from him.  No she is well paid and knows he will return and it will all happen again….
Advertisement

a day in the life